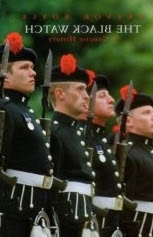 The Black Watch was formed at Aberfeldy in Perthshire in the early eighteenth century as an independent security force, or 'watch', to guard the approaches to the lawless areas of the Scottish Highlands. Instantly recognisable due to the famous red hackle cap badge and the traditional dark blue and green government tartan kilt from which it got its name, The Black Watch was renowned as one of the great fighting regiments of the British Army. Black Watch Books.
Posted by Alan Copeland at 20:38