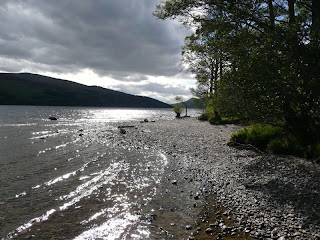 A truly picturesque loch, Loch Tay is 15 miles in length with an average width of about 0.9 miles. The shores of Loch Tay were at one time the home to many small farming communities but these were largely destroyed in the times of the 'Highland Clearances'. Many remains of these small communities can still be seen on the lochsides and on the hills above the loch, and noteably in the remains of the old village of Lawers on the shore south of the modern Lawers village, and hillside shielings used by the farming communities during the summer.

Signs of earlier communities may also be observed in the shape of ancient stone circles, standing stones and carver 'ring and cup' markings on the rocks, noteably on the northern shores.

There were a number of Crannogs in the loch (dwellings on stilts or atrificial islands.) Remains of one of these may be seen near the old Killin Pier, and more spectacularly, one has been re-created and is open to the public at Acharn close to Kenmore(The Scottish Crannog Centre).

Eating out in Perthshire
Posted by Alan Copeland at 20:46