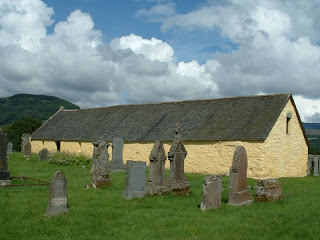 This chapel served the small settlement of Pitcairn, which extended around the walls of the castle of Grandtully, and which was within the parish of Dull. It was probably built around 1533, when Alexander Stewart, who lived in the castle, provided endowments for a priest to serve here. It was enlarged and refitted in 1636 by Sir William Stewart, who was the Sheriff-Principal of Perth under Charles I. In 1883 it briefly became a parish church, but nine years later was abandonded for worship when a new church was built elsewhere, and for a while it was partly used as a byre and farm store.

Eating out in Perthshire
Posted by Alan Copeland at 20:42

It that was necessary for me. I Thank you for the help in this question.
I am assured, what is it — a false way.
I apologise, but, in my opinion, you are not right. I am assured. Let's discuss it. Write to me in PM, we will communicate.
I think, you will come to the correct decision. Do not despair.
There are some more lacks

An impressive share! I've just forwarded this onto a coworker who was doing a little homework on this. And he in fact ordered me breakfast simply because I found it for him... lol. So let me reword this.... Thank YOU for the meal!! But yeah, thanks for spending some time to discuss this subject here on your website.

Have a look at my site - クロエ アウトレット