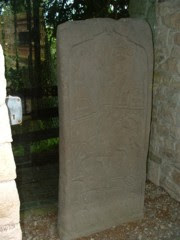 At Dunfallandy, just south of Pitlochry, you will find the Dunfallandy Stone. This Pictish cross slab was probably carved around the 9th century. On the front is a cross divided into panels of interlaced ornament and flanked by angels and beasts. On the back, framed by two serpents, are seated figures to either side of a cross, a horseman, tools and five of the enigmatic Pictish symbols.

These stone slabs are the most enduring and distinctive legacy of the Picts. At a time when the rest of Britain used the Roman alphabet for memorials, the Picts preferred graphic symbols. The symbols were used and understood throughout Pictland: about 200 symbol stones have been found, some complete and others fragmentary. The earliest stones were rough slabs with the designs cut into the surface. Later the symbols were sculpted in relief on elaborate cross slabs.

The stones are difficult to date but seem to span the three centuries between about AD 550 and AD 850. Symbols were also carved on the walls of caves and on small objects including silver jewellery. It is impossible to know what some of these symbols meant to the Picts, for they have left no written records apart from a list of their kings. Many theories have been argued. The stones may have marked land boundaries or the graves of important people. The symbols may represent tribes or noble lineages and their messages record marriage alliances. Perhaps there is no single answer - the Picts may have set up stone monuments for as many reasons as does modern society.

The Picts were converted to Christianity during the late sixth and early seventh centuries, and thereafter the symbols were used on shaped cross-slabs as well as on rough stones. Usually one side was carved with the cross surrounded by clerics, angels and intricate patterns, while the other side might bear a medley of Pictish symbols, huntsmen and Biblical scenes: Pictish symbolism and Christian symbolism in harmony. Themes based on the Biblical stories of David were especially popular.

The use of Pictish symbols was abandoned in the ninth century under Scottish rule in central Scotland and as a result of Viking dominance in the north and west.

Eating out in Perthshire
Posted by Alan Copeland at 20:31