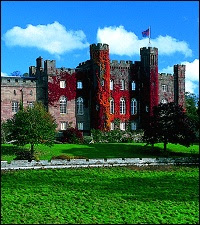 Scone is a place that breathes history like nowhere else in Scotland. Today, in the 21st century, it is the home of the Earls of Mansfield, and a major attraction to visitors from all over the world. Fifteen hundred years ago, it was the capital of the Pictish kingdom and the centre of the ancient Celtic church. In the intervening centuries, it has been the seat of parliaments and the crowning place of Kings. Scone Palace has housed the Stone of Destiny and been immortalised in Shakespeare's Macbeth.

Poised above the River Tay, the Palace overlooks the routes north to the Highlands and east through Strathmore to the coast. The Grampian mountains form a distant backdrop, and across the river stands the city of Perth. Two thousand years ago, the Romans camped here, at the very limit of their empire. They never defeated the warlike Picts, who later came to rule Scone, but the followers of St Columba had more success.

By the early 7th century, a group of early Christians, the Culdees or servants of God, had established themselves here. The early history of Scone as a centre of religion continued for many centuries. In 906, King Constantine proclaimed on the Hill of Credulity that the religious laws and customs of the Celtic or Culdee Church be established. Scone remained a College of the Culdee Church until 1114, when it was superceded by a monastery founded by Alexander I.

Eating out in Perthshire
Posted by Alan Copeland at 20:35